Aaron Eckhart  will star in the psychological thriller "Fade Out," to be directed by Robert Salerno and produced by Anthony Bregman and Naomi Despres.

Salerno will direct from an original screenplay by Pulitzer Prize winner Michael Cristofer.

Recovering from a nervous breakdown, screenwriter Jim Connelly (Eckhart) spends his days in a tropical beachfront villa being cared for by his glamorous wife Anne. He starts writing a new screenplay about a jealous husband who murders his unfaithful wife, but his intense paranoia and hallucinations cause fiction and reality to blur. As the events in Jim's screenplay appear to materialize, he becomes a suspect in his own wife's disappearance and must outrun the police as he pieces together the puzzle seemingly designed by his very own mind.


Currently in pre-production, principal photography on the film will commence in mid-February 2014 in Puerto Rico.

The Solution will represent international rights and will introduce the project to buyers at the American Film Market this week. Producers are currently handling US rights.

"'Fade Out' is as irresistible as a potent Caribbean cocktail: a twisted mind-bending thriller set in a sun-soaked beach town -- from a smart script full of surprising twists, and with true artists in front of and behind the camera,” said Bregman.

“Aaron is a versatile actor who has shown immense range across his performances and is the perfect actor to bring the character to life in this Hitchcockian thriller. We’re delighted to be partnering with Bob Salerno on his directorial debut and debuting the project at AFM,” said Lisa Wilson and Myles Nestel.

LizaOnFilm: Kyoto in Fall
Posted by Unknown at 5:47 AM No comments: 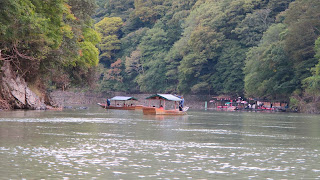 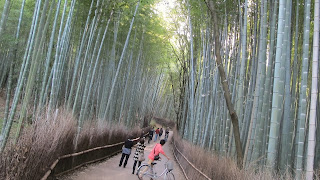 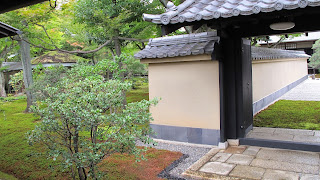 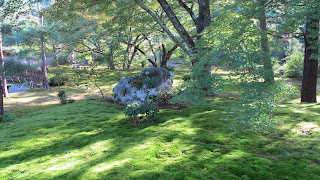 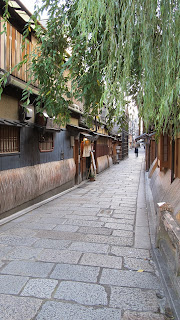 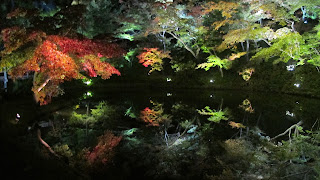 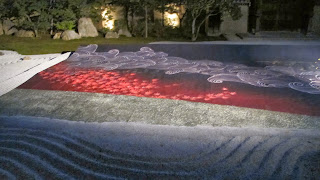 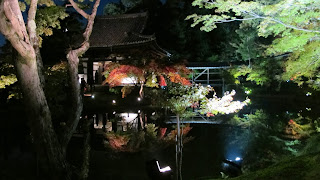 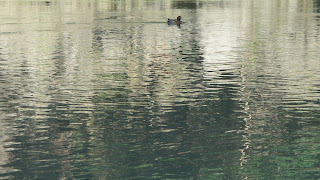 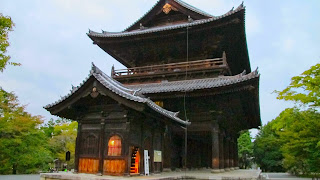 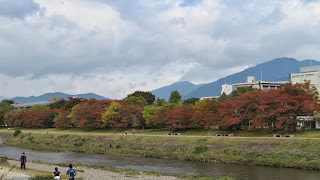 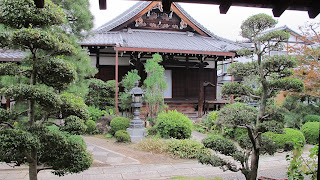 Posted by Unknown at 5:42 AM No comments:

LizaOnFilm: 26th Tokyo Film Fest. Jury Talks: By Liza Foreman The 26th Tokyo International Film Festival (October 17 - 25, 2013) is underway. Here is what the jury had to say at thei...
Posted by Unknown at 5:14 AM No comments: 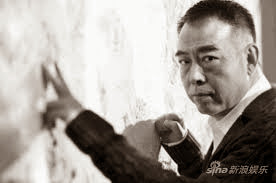 The 26th Tokyo International Film Festival (October 17 - 25, 2013) is underway. Here is what the jury had to say at their opening press conference on Thursday. And we will hear from them in about eight days time, following their marathon film watching schedule, and see what they have to say then.

15 films have been selected for the competition section. The judges this year include jury head Chen Kaige (pictured) and -
Chris Weitz: I’d like to express my gratitude for being chosen as a jury for the Tokyo International Film Festival. The variety of films chosen for competition are pretty extraordinary. There are comedies, dramas, and films with great social importance. What I’m looking for is a spark of creativity. The ideal thing for a director would be to draw inspiration. Personally, I’m looking for something that’ll remind me why I love cinema so much.
Moon So-ri: I’m so happy to be able to come to Japan again. In fact, coming to Japan is like seeing a good friend. I’d like to watch and enjoy the films as an audience rather than as a jury. After the film is over, I’ll probably really think about that film in terms of the director’s thoughts, what message the director wanted to convey, and how deep the director’s heart was in the film. The film that reached out to my heart the most is probably the one that I’d like most.
I’ve been touched by actors with decades of experience in acting and have been impressed by children or amateur actors as well. Rather than the actors’ surroundings or techniques, what’s important is his/her sincerity towards acting. When that sincerity is felt, I believe one’s heart is greatly moved. I hope to see such acting in the competition films.
Chris Brown: It’s a double pleasure to be at this festival—to be a member of the jury and to have my film screened at this festival. I look for inspiration in films. But at the same time, there are so many movies to see that it’s as if being presented with the most incredible feast! In each and one of them, one will find inspiration and stimulation through a story that is exciting. My hope is that, that is what I will find in this banquet of delicacies.
Shinobu Terajima: I realize that I have a very important role as a member of the jury. I think it’s much easier to walk down the Green Carpet than having to judge films. A film is shown on a dark screen where all of a sudden, I am pulled into the screen and the film. Those are the films that remain with me for a long time. I like movies where various facets of human nature and behavior are portrayed.
As for judging films as an actress, there are movies I see purely for entertainment. Yet, as an actress, I do pay close attention to the acting in films. If I think I’d do better, then maybe that movie wasn’t such a good one... But when I feel almost jealous towards the acting, I know it’s a good film. As a matter of fact, I was very jealous of Ms. Moon So-ri’s acting in Oasis!
Chen Kaige: We have our responsibilities as a juries but I also think the pressure is on the media. That is, this festival lies in the hands of how the media presents this festival to the world. I am working on my next film at the moment, so coming to the Tokyo International Film Festival is a great chance to see films created by new directors.
A film mirrors the director as he/she is. Therefore, even if you don’t personally know the director, a film can tell you who a friend is. I look forward to seeing films that are rich in unique personal experiences. Without experiences, the world of cinema wouldn’t have come this far. At the same time, experiences are something which the audience should be able to empathize with. I hope to see such films at this festival.
Young directors are free from the pressures of filmmaking. I was just over 30 years old when I shot, Yellow Earth. After I studied film direction at the Beijing Film Academy, I had no experience in filmmaking and very little concept of what film direction was about. It was a bold move I took making that film. After shooting several films, you begin to be judged on the outcome of the film which becomes daunting. Yet, young directors need none of that—I say they be bold and challenging, and to maintain and express their purity in their films.
Posted by Unknown at 5:08 AM No comments: 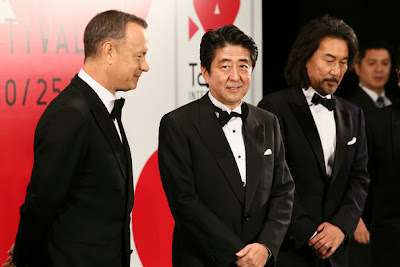 Prime Minister Abe spoke before the screening about the commitment of the Japanese government to “Cool Japan,” a scheme designed to support the growth and export of soft industries, including audiovisual content and fashion. “I would like to make the growth of content a central part of Japanese economic growth,” he said during his speech in which he also talked up the recent successes of Japanese films abroad.  He noted that DreamWorks will remake the Cannes Jury Prize Winner, “Like Father, Like Son” from director Hirokazu Kore-eda.
Prime Minister Abe’s sentiments were also echoed by Japan’s Minister of Economy, Trade and Industry, Toshimitsu Motegi, who also spoke at the opening night ceremony in Roppongi Hills. Hanks regailed audiences with an amusing tale of meeting the real life Captain Phillips prior to making the film by Paul Greengrass who was in attendance. The film is based on a real life drama from 2009 in which a cargo ship was pirated and the captain taken hostage. Chen Kaige heads this year’s jury.
Mr. Kaige presented on stage the jury members including the director Chris Weitz, the producer Chris Brown and the Japanese actresses Shinobu Terajima and Moon So-ri. Films in competition this year include the Iran’s “Bending the Rules,” “Barber’s Tale” from The Philippines, and the Georgian film “Blind Dates.”
Tokyo has a long tradition of supporting new directors and also green causes through its Green Carpet and other eco friendly events. Yasushi Shiina serves as director general for the festival this year, taking over the reigns from the outgoing head, Tom Yoda.
Posted by Unknown at 8:53 AM No comments:

LizaOnFilm: Prada Spring/Summer 2014: A Think Piece on Women a...

LizaOnFilm: Prada Spring/Summer 2014: A Think Piece on Women a...: By Liza Foreman Prada Spring-Summer 2014 Britney Spears is not the first person you think of when wandering between the stucco-c...
Posted by Unknown at 1:23 AM No comments: